It's Not a Venture Bubble (With Charts!)

Over the past few weeks, I’ve felt like my discussions with other VCs and founders about the crazy valuations environment have gotten both more numerous and more intense. I thought it might be helpful to share my frameworks for thinking about asset valuations, and for deciding what to do about all of it.

The Debt Supercycle and the Fed’s Money Printer

A lot of people probably know this part already, but it’s worth spending some time on.

Interest rates have been decreasing for the last 30+ years, fueling a boom in credit and spending. This was good times for all until, of course, the financial crisis of 2008, which started a big, painful deleveraging.

During the recovery process, interest rates were already so low that lowering short-term rates further (i.e. normal monetary policy) wouldn’t have had much of an impact, so the Fed pulled out another tool: quantitative easing.

The Bank of England published the best explanation I’ve ever seen on QE, but essentially, the central bank prints money to buy government bonds, which increases the price of those bonds as well as of other asset classes, which stimulates the economy. The mechanism is supposed to work in two ways:

There’s also an impact from the lower yield of longer-term bonds: As discount rates (the rate at which future cash flows of any asset are discounted to present value) go down, asset prices increase across the board.

The Fed deployed this tool in the years following the 2008 crisis, and is doing so again now. There’s been a ~$1 trillion increase in the monetary base compared to the beginning of 2020, and a nearly $4 trillion increase since the 2008 financial crisis.

Massive increase in the US monetary base.

So the price of assets going up — that is, inflation in financial assets — is literally both the point of QE, and the way it’s supposed to stimulate the real economy. Are we seeing the money flow into the real economy? Sort of, not really. Total consumer expenditures are a bit below where they were before the Covid recession. 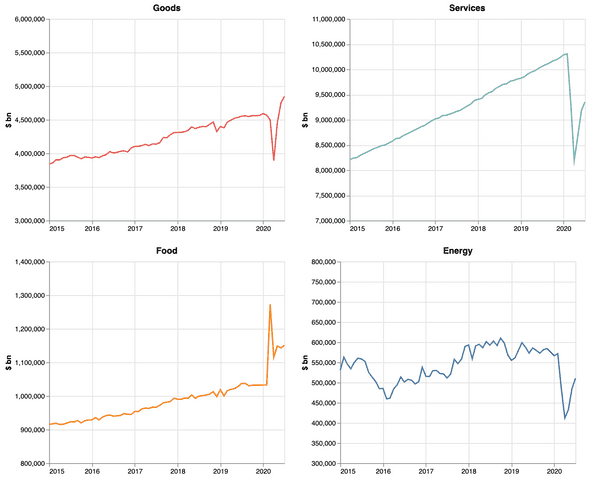 Spending levels of US consumers across different categories; total spending is slightly down compared to pre-Covid.

That money is primarily pumping into financial assets, with pricing ripple effects all the way up the risk curve — from bonds to riskier assets like real estate, equities, private equity, and, of course, venture capital.

Assets along the risk curve.

In venture, you can see the effects of more money sloshing in: Fund sizes have gotten bigger and bigger; and the number of seed and micro funds and rolling funds and solo capitalists has grown; random guys in Bradenton, FL are buying shares on Forge Global. The “real economy”, or the number of startups working on big problems, can’t grow as quickly, and voila: venture inflation.

In addition to the impact of the government’s unprecedented QE efforts, it’s also been an incredible environment for corporate earnings: globalization, weaker unions, scant antitrust enforcement, proliferation of technology with low marginal costs, ever-lower corporate taxes. So stock prices have risen due to this secular growth in earnings levels, and stock valuation measures have risen due to the secular decline in interest rates and the impacts of QE; if you had bought the S&P in March 2009 you’d be up 420% right now (August 2020), for a ~16% IRR.

Valuation measures for equities — price/earnings and sales/earning ratios — have been increasing for years due to a number of tailwinds.

During the pandemic, tech stocks have outperformed the rest of the index. Shelter-in-place and remote work have required rapid adoption of new digital technologies and tools across companies (Zoom!); people stuck at home are spending way more personal time online, benefiting companies that monetize our attention for their business models.

Market cap-weighted index outperforms an equal-weight due to the tech giants that represent ~25% of the S&P market cap.

Finally, tech stocks have also benefited significantly from falling bond yields — because so much of the expected profit of a “growth stock” lies further into the future, they’re particularly sensitive to discount rates. (There’s also some weird SoftBank thing going on, because of course.)

Venture, of course, is a riskier and more illiquid asset class than even tech growth equities. Venture-backed companies also tend overwhelmingly to be tech companies. So insofar as equity pricing is crazy, and tech equity pricing is very crazy, venture pricing is and should be extremely crazy, from the combination of quantitative easing, corporate margin tailwinds, tech outperformance in Covid-times, and a huge sensitivity to falling bond yields given the discounting of very distant profits.

That last point is important: Not a lot of people, especially people actively investing in venture right now, really think about it, because our entire investing lifespans have taken place in a falling yield environment (“What the hell is water?”). But the massive secular decline in rates has disproportionately benefited start-ups with long-duration, possible-positive cash flows.

The chart below (thanks, Campbell) shows the estimated sensitivity of various asset prices to a change in the discount rate — start-ups lie on the very far right. 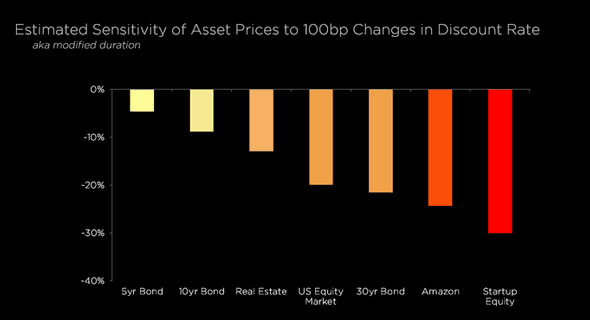 Start-up prices are the most sensitive to a change in discount rates.

The Future: Returns Going Forward, and the Bubble Question

Unfortunately, what all of this means is that while backward-looking returns have been incredible, forward-looking long-term expected returns are likely near all-time lows. The huge rally in assets has basically pulled forward a lot of the next decade’s expected returns.

…an asset is just the present value of a stream of future cash flows. Over long periods of time, the cash flows of assets are relatively stable and predictable, but their present values (i.e., their prices) change a lot. Looking backward, rising prices produced high returns, but looking forward, higher prices for the same cash flows produce lower future returns. This creates a mechanically inverse relationship between realized and expected returns that has been at work over the past eight years.

The chart below shows how this dynamic plays out in a traditional 60/40 portfolio. This was published in 2017, but the divergence is only more severe now.

Another point Bridgewater makes about the potential growth of future wealth:

“Wealth is simply a claim on someone’s future income, so wealth growth beyond income growth has its limits. Relative to history, financial wealth is already elevated relative to income. At current rates of expected nominal growth, extrapolating anything close to historic returns would lead to a large rise in wealth relative to the incomes needed to service these claims. Achieving the type of nominal returns many investors are expecting would either require a significant rise in the pace of productivity or inflation.”

I think that last part could be a crucial caveat in the venture context: We believe we’re investing in technologies that increase productivity. And as tech becomes a larger and larger part of the economy, we might just be able to expect that financial returns in a zero marginal cost world can outstrip income.

Of course, that hasn’t been the case so far. The topic of productivity and how we should think about it in a tech-first world deserves a whole treatise of its own (if you’re interested in productivity, I highly recommend this book), but the chart below shows that labor productivity growth has been low relative to history for the last decade, and not meaningfully accelerating.

US productivity growth has not meaningfully accelerated even as tech has become a bigger part of the economy, and even more so of the equity market.

Does the low returns environment mean we’re in a bubble? I would argue technically not, though it might be a semantic point. A bubble, well, pops: When it ends, it ends sharply and rapidly. We’re probably in more of an overinflated kiddie pool: There’s an unsustainable level of air in there, and it’s going to get saggy at some point in the future, but we can probably have some fun on the way down.

To be a little more specific, and referring again to Bridgewater’s work here, they’ve come up with seven indicators of a bubble:

In venture, prices are high, for all the reasons discussed earlier; we’re also discounting high appreciation, as we all target normal venture IRRs off of these already high price levels. And it does seem like new buyers have entered the market, with all the aforementioned new funds and solo capitalists and guys in Bradenton investing in start-ups. But with the amount of hand-wringing I’ve heard, I don’t think there’s broad bullish sentiment. Purchases are not yet being financed with high leverage, we haven’t seen weird speculative behavior (someone tell me if I’m wrong on this). And while monetary policy is appropriately stimulative given the real-economy recession we’re in, we’ve also seen the central bank ready and willing to tighten monetary policy appropriately when conditions call for it — and yes, pulling back on the rate of QE does represent a tightening.

There are, of course, a range of possible outcomes from here. If the Fed keeps printing, that kiddie pool keeps inflating, and the party (especially for tech) continues — but becomes more and more likely to explode at some point in the future (i.e. a “bubble”). If the Fed stops printing and the overall economy is in a place where income can balance debt service and inflation is acceptable (i.e. not deflation), then it’s a slow return to “normal”. In this scenario, tech might be hurt worse than the rest on the way back to normal, given the impact of discount rates. And if the Fed stops printing while the overall economy is still unable to keep itself going, then tech is very expensive and will crash, alongside everything else.

If you’re an LP, the “so what” depends a lot on your particular circumstances — your asset mix, your goals, your liabilities, what you are and aren’t allowed to do, etc.

If you’re a founder, it’s a great time to build in the real economy, but also an important time to raise capital responsibly and wisely: When that air starts getting let out of the kiddie pool, it’s going to go faster in some places than others.

And as venture investors, our jobs are to create alpha: to outperform equity and private equity benchmarks, and to outperform our particular fund vintages. Every other fund in this current vintage is facing these same pressures and headwinds, and beyond that every other asset class is facing similar forward-looking pressures and headwinds. So all you can do is a better job than anybody else, which is all you can ever do.