“Are you being stupid or lazy?”

It’s a question my husband and I ask each other whenever one of us has made some kind of mistake, which is often.

Stupid means you messed up because you didn’t know better. Lazy means you knew the right thing to do, but didn’t care enough to follow through.

This probably sounds horrible, but actually we’re very happy. We cut through all the annoying, hard parts of relationships so we can do more of the fun parts. He now reads fine print, and I think twice about doing something that might cause lasting damage to our 110-year-old house. It takes way less time than fixing these mistakes after the fact. (Though I’ll almost certainly keep getting parking tickets; some things never change.)

I encountered this lazy/stupid paradigm at Bridgewater, where I worked as a global macro investor for a few years. If you haven’t heard about the culture there, it gets described as “cultish” almost as often as Palantir gets called a “secretive data company”. Bridgewater’s culture of radical transparency has its pros and cons, which I won’t get into now. But one of the things I most miss about being there, crushing Excel in the quiet pines of Connecticut, is the feedback and the incredible rate of personal growth it fueled. Since leaving, things have slowed on that front.

I can trust my husband to hold me accountable in my personal life. But I also spend the majority of my waking hours at a job in venture capital that I care about, want to constantly be improving in…and don’t get much feedback from. The founders I meet with spend their mental energy convincing me to give them money so that they can get on with changing the world, rather than telling me what they think of, say, my conceptual ability (and rightly so!).

So I want to proactively take on the work of keeping my ego in check and seeking out feedback from others. What follows are my thoughts on why this is important, and how best to make my feedback loops shorter and faster in this wild world, outside the walls of Bridgewater.

The benefits of feedback weighed against the cons of ego pain

It takes a good amount of ego suppression to get to the point where being called lazy or stupid (or a host of other things) doesn’t cause pain and defensiveness. Actually, it’ll always cause pain and defensiveness, and it’s just a question of managing those feelings over to the side enough for the feedback to get through. Saith the running baboon to Bojack Horseman: “It gets easier. Every day it gets a little easier. But you gotta do it every day — that’s the hard part.” 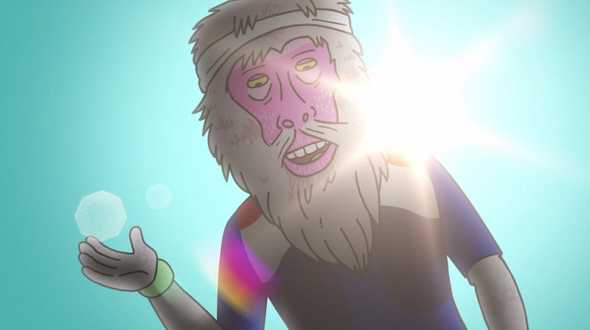 “It gets easier. Every day it gets a little easier. But you gotta do it every day — that’s the hard part.”

Getting better at doing this was huge in a lot of different ways, but the outcome that most surprised me was this: while my level of ego decreased, my self-confidence actually increased. I’d always been rather shy, preferring books to people and hiding myself behind indifference and a curtain of long hair. I never knew if what I perceived was reality, so I mostly kept quiet. But having strangers observe, reflect, and comment honestly on everything I did was like getting a haircut and pair of glasses. It has allowed me to move around the world with much more grace.

A useful framework, for me, in thinking about what feedback is for is the Johari window. The “window” organizes what I know about myself, and what other people know about me, into a way to understand my relationships. Because the graphical representation of the 2x2 grids looks like the classical game theory payoff matrix, I’m tempted to assign payoff values to each box (windowpane?). 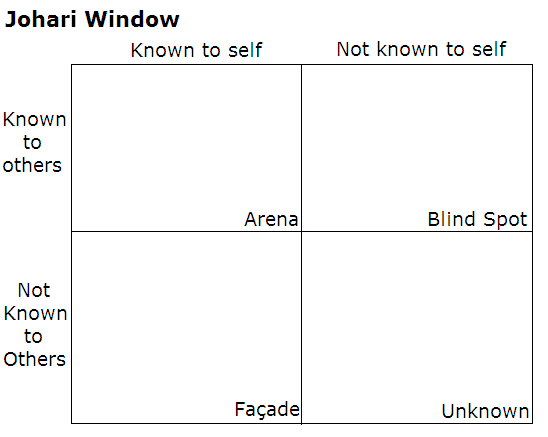 The Arena outcome, of course, is optimal for all players. The more things there are in that category, the better. This is what it means to me when I say feedback is a gift. Someone helping me increase the “known to self” box is increasing my ability to build meaningful relationships and do meaningful work.

Giving someone feedback is caring for them, enough to really see them — and don’t we all want to be seen?

Not all feedback is created equal

So, then: What kind of feedback is actually helpful?

I dislike almost all of the conventional advice about feedback. “Actionable”, “about behaviors not personal attributes”, “about the process not the person”, “empathetic” — these are some of the words I’ve heard used. Far be it for me to litigate this advice when it’s in the context of managing employees; any organization and its unique culture requires a more nuanced treatment. Rather, I’m trying to get feedback that is useful to me, so here’s what I think:

My selfish request, then, is for feedback about my attributes, ranging from trivial to significant, delivered directly and all the time. At Bridgewater, we called individual pieces of feedback dots. The idea is that no single dot is all that informative. But like a pointillist painting, they aggregate to form a coherent picture of what a person is like.

This is what I see when I zoom in on dots my coworkers submitted about my ability to synthesize: 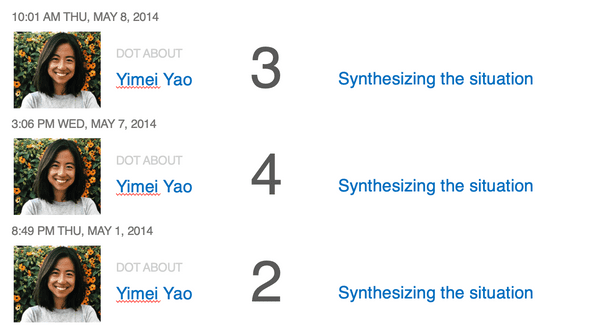 This is an illustrative reproduction of real dots I received.

But I would see something more like this if I zoomed out:

A lot of things happen in a day, month, year. The dots system is much more robust than an annual, or even quarterly, review, which is lumpy and weighted toward recent events. No one in a busy workplace can remember what they had for lunch yesterday, much less what they thought of me two months ago on a broad range of attributes with appropriate weights and trend lines. Reviews, I believe, are based too much on how much people like each other at that moment in time.

How do I get this kind of feedback

My struggle, now, is how to gather this volume, detail, and quality of feedback. At Bridgewater, we had a Dot Collector app and a norm of providing feedback to each other constantly. So I’m trying something out: my own feedback web app, in the style of Bridgewater’s app. I’ll be including the link in my email signature, and Slacking it out to my colleagues regularly, to encourage everyone who interacts with me to give me a thumbs-up or thumbs-down on any quality.

I hope I can learn and grow from the feedback I get through this dot collector. I’m also trying to jailbreak my performance review: Over time this should serve as a public resume for me, so anyone thinking about working with me knows what they’re getting themselves into. I want to own my performance data and have it follow me around. And hopefully it’ll provide a more honest picture than the “Skill & Endorsements” section on LinkedIn.

Finally, it’s open-sourced, in case anyone wants to try it for themselves.

Feedback is a gift, and I’m looking forward to getting more of it from the generous souls who participate in “Laura’s Dot Collector” :).

Subscribe to be notified when that happens, @ me to suggest other things I should write about, and of course, please leave me some feedback!